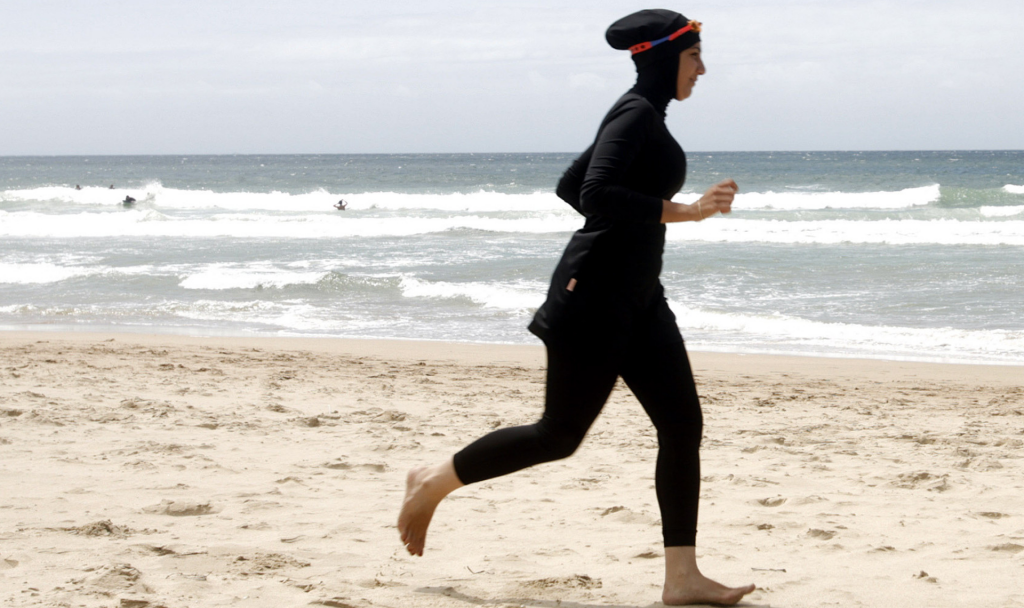 Public places Tell me more? From burkini to Ganesh … On the crest of a wave ?

The spotlights were turned towards France about the debate on “Burkini”, followed by the decision of the Council of State. It certainly is going to continue to spread while other situations of the same type give evidence of the noxious climate which settles down in the hexagon.
Naturally, the closeness of the presidential election establishes a driving element within these declarations and various proposals race.
Undoubtedly, one of the major points to bring up is the notion of the public space and the way of considering it, by the users, the citizens, as well as the standards, the rules and the relative laws. Proposals come from all sides to transform into law, the ban on the “burkini” on the beach but also, on any religious ostentatious sign in the public area, to quote only two of them.

It is rather sad, but still a reality, that we witness in this controversial atmosphere that in the XXIst century, that of the world-cities, in a globalized, urbanized and massively ubiquitous planet, we notice, at least, an increasing inability by number of politicians to initiate a proper debate, about a clear and objective vision, a definition and an understanding of what the public place means, in our lives which have become mainly urban and neeedless to say, also more and more cosmopolitan. This subject is at the heart of the great shifts which take place before our eyes in all our cities, from north to south and from east to west of our planet. Public places for all are also an opportunity for our urban lives.

The unsettled issues regarding town planning and education, the feelings of fear which stem from our difficulty to understand and to act in relation with the demographic, sociological, cultural, religious evolutions, or of a different nature, should not over-focus (a posteriori) on the arena of the public place, in reply, even to serious problems, which roots and treatments are to be found elsewhere.

In the name of the secular republicanism, and in the name of the just fight for the women rights, the public places, the places which are at the heart of the urban life, cannot become the hostages of a political or ideological fight, marked with rhetoric and with subjectivity, against the laws of the Republic, which establish the “live together nicely”.

Assuming a religious behavior so that it expresses itself in the private sphere and in the reassurance, requires considerable efforts to all, besides in a world in strong tension. Education, culture, training, sport, collective or individual practices are all the more essential in the societal crisis and the strong vulnerability of our lives and our territories. But it requires as well, to be in capacity to make the difference between the public space and the public sphere. This confusion is at the heart of the debate on the burkini and its collateral effects.

How to explain that the first serious incident in Corsica spread like wildfire, giving rise to stops anti-burkini on the beach, when in reality it turned out to be a scuffle, between people from Maghreb and Corsican indeed, but without any link with this garment?
Orders taken by the municipalities have never stated illegal acts committed towards others in the public area, the beach, but were promulgated in the name of “possible public order offences”, far beyond the way of getting dressed.

At the same time in Paris, on August 28th, a magnificent religious feast took place, in the public space, the streets, that of the Indian divinity Ganesh, with parades in traditional costume, singing and praying, with coconuts to be broken: the shell symbolizing the illusion of the world, the flesh the individual Karma, and the water the human ego. By breaking the coconut, we call back the imperative to transcend the illusion and its ego.
Then what about this clothing, this festive, religious attitude in the public place? Shall we abolish it, and in the name of what?

The response we are hearing becomes almost automatic: the burkini is perceived as a threat because it represents the confinement of woman, as well as an ostentatious sign of political reunification, and besides, Ganesh was never called to kill in our streets …

Here we are, not discussing objectively and serenely anymore on the public area and its use for all, in the respect of the laws of the Republic, but wishing to do it around subjective notions, calling on to “inner convictions” or ideological postures, carrying our voices, on what we call “the public stage”. They become the political expression, the public sphere of some, carrying a particular vision, against what the Republic established for public spaces, as a common good.

The notion of public place itself has evolved through the time … A few reminiscences …
The square of the City Hall of Paris, for example, also became the “Esplanade of the Liberation”, in 2013, in memory of fights for its freedom, 72 years ago, now.
What was admitted or not, in public places under occupation, remains in our memories, but is not useless to call back in this end of August, on the anniversary of the Liberation.
Do we remember that this square was the Place de Grève in the far-off times ? With its sandy beach, the shoreline, on the banks of the Seine, was the site of loading and unloading … Thus the Shoreline was the place where the unemployed people came to find an activity, working on boats. The same shoreline, besides, became later, quite the opposite, i.e a work stoppage for better conditions of employment… But this public square, in the Ancien Régime was the place of executions, inhumanities, public tortures … The times have changed for good, very fortunately …

Examples of evolution of the public place in the French Republic are numerous.
Thus what about the public place? It is necessary to become aware that it is a major conquest of the French when becoming free citizens, because the public place is a founding space of society. In our modernity, it represents places of plurality, of difference, of freedom, but also places open to the foreigners, and in a globalized world, also those of cosmopolitanism, of social and cultural mix, which is an urban reality, in a changing world. To feel threatened in our identity by the use of the public space is the expression of a weakness which cannot be solved by bans …

The public area obeys two fundamental notions: its accessibility to all and its hospitality. As such, it has to allow one’s attendance and the expression of all, without being conquered or seized by a majority or a minority to the detriment of its quality of common good. It was necessary for example, to let everybody know all these founding principles during “Nuit debout“on the Place de la République in Paris.

It is a place of socialization of all the expressions, as long as they respect the Republican pact of the well-being, registered in the laws and the Constitution.
The public place should not be confused with the public sphere, which establishes an interpretation, individual or collective of what takes place, including in the public space. The public space intrinsically bears the strong values of tolerance, openness and respect; It has to embody the intermingling, the mix and the diversity which are a characteristic of public places at a time when urbanization becomes massive and cities are becoming metropolises, megalopolises and world-cities.

Then yes, a debate has been taking place marked with a very big confusion, with a combination even a manipulation, between what is regarding the public space and the public sphere, on the feminine clothes, the subjects on which the Council of State called back the founding principles.

To refuse diversity, intermingling, the cosmopolitanism of the public places of a city in the XXIst century means wishing to close the city to set up its former bulwarks and condemn it to decay.

We should talk about our vision of the public space as the place of free expression, mixed environment and life.