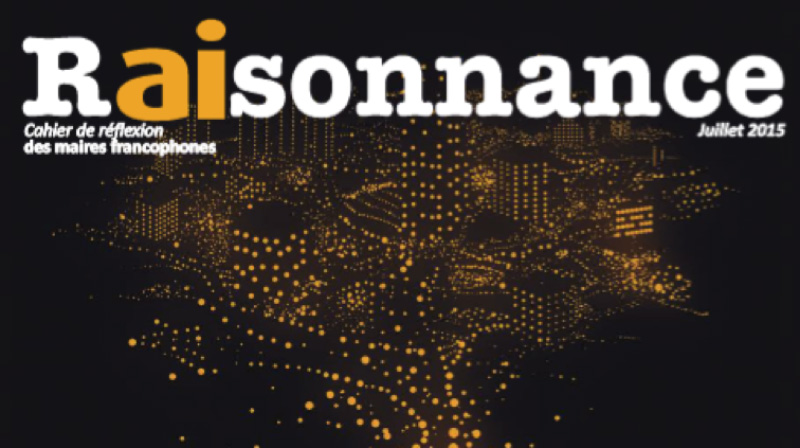 Cities are facing an environmental, social, economic, health and security crisis. Does the “smart city” provide mayors with solutions to this crisis?

We need to start by asking ourselves what we mean by a smart city. I think we need to make clear that it’s not about a neo-positivist vision, in which technical advances are seen as the solution to all of the problems facing our cities. There is – or there was, because people have started to see things differently over the last few years – a risk of taking a “technocentric” view of the smart city. Some people used to think that a smart city was one that develops highly technical solutions to complex problems. If that’s what we’re talking about, then my answer is clear: no, that sort of smart city cannot provide a response to the environmental, social, economic and other challenges facing mayors.

On the other hand, the work currently being done on the “human-centred” smart city, that is, a city in which citizens play a central role, will help us identify solutions to the problems confronting cities today. That’s where the solutions lie.

What are the components of this future city? Are there objective criteria which would allow us to create a “model” of a smart city?

I’d like to quickly remind ourselves of the building blocks of urban development to better address current developments.

The city, in every time and every place, is built on four constants: the urbis, that is, the infrastructure; the spatium, that is, the public space, its role as a melting pot, its mix of people; the res publica, that is, public affairs, the common good, the general interest; and the civis, the citizen. Following the emergence of new technology and the growth of the internet and smart communicating systems, a fifth constant has arisen – the ubiquitous revolution and its tools – which have turned the way we live in cities upside down, beyond considerations of time or space.

The challenges facing our cities are also pretty much constant in time and in context. So we can identify five key challenges: social, cultural, economic, ecological and resilience.

Those are the constants. But a city is, above all, a context. Each city has its own personality. It is the product of its history; it reflects the lives of its inhabitants and their common cause. It is a living city. It’s extremely important to take this context into account. It’s so decisive, in fact, that it’s impossible to talk about “THE” smart city. Let’s take the example of car sharing. In major European cities, it’s a solution that people like and support because it gives them an opportunity to reduce their transport costs while helping protect the environment. In Latin America, the car is still an extremely important measure of social status. Car sharing, therefore, is still fairly socially unacceptable.

But beyond differences in context, it’s still possible to identify the goal shared by all smart cities: improving our quality of life. And mayors are able to do this using three levers: social inclusion, reinventing the urban infrastructure, and the technological revolution.

We’re already there. At the crossroads between these five constants (urbis, spatium, res publica, civis and ubiquitous) and five challenges (social, cultural, economic, ecological and resilience), we need to use these three main levers to draw up a road map for the smart city.

So it’s impossible to create a single model of the smart city. History, context, governance habits, citizens and their way of exercising their citizenship, and the introduction of technological solutions and their ownership, all mean that each city needs to find its own way of being “smarter”.

What do you think of the “race” to be a smart city, fed by international rankings and the images we see of showcase neighbourhoods springing up across the world?

Once again, we need to put things into context. If the 19th century was the century of empires, and the 20th century the century of nations, the 21st century is, without any doubt, the century of cities. Look at the size of certain megacities, their huge economic weight, and the socio-cultural trends they generate. As a result, the city is detaching itself, socially and politically, from the rest of the nation. Cities are developing a very strong socio-territorial identity, which is no longer the same as that of its country. And as clearly demonstrated by the sociologist Saskia Sassen, this has an impact on the sphere of influence of cities, international cities, world cities, which are developing at a fast pace on a global scale.

The “smart city” label is, in this context, a key element of a city’s appeal. That’s very positive, of course, if you take an integrated, citizen-centred approach. Unfortunately, international competition too often leads to the construction of showcases, hyper-technological neighbourhoods… which coexist with undesirable ways of occupying the public or private space, or even shantytowns in a lot of countries, where people lack even the most basic services. The smart city, especially the developing smart city, cannot and should not be limited to these showcases.

We also need to move away from the idea that a connected city is a smart city. A smart city is one that constantly strives to improve the quality of life; it puts human beings, all human beings, at the heart of the urban project. If the connected city does not create social links, it is probably, paradoxically, going in reverse, promoting isolation, developing what we call zombies – geeks, when we actually need citizens who are digitally savvy, of course, but above all proactive.

What is the mayor’s role in all this? Haven’t recent developments changed the nature of their job?

Of course the mayor is affected by the impact of the ubiquitous revolution on their city’s development. This technology changes the relationship between mayors and citizens; governance – our way of doing politics – is changing with it.

Obviously, we’ve moved on from traditional representative democracy. Citizens now have the technical means to keep up-to-date and take action on a day-to-day basis. Social networks make it possible to bring hundreds of thousands of people onto the streets in a matter of hours. It’s a way citizens can put a lot of pressure on local elected representatives and, more generally, national governments. However, it also works the other way, because these new technologies are a great way of getting to know and understand citizens in their context, in order to give them the tools they need to play a role in the life of their urban community.

On the other hand, the position occupied by these new players in the fabric of the city has also changed, whether we’re talking about citizens or large companies which offer highly technological “smart city” solutions for example. Within this context, the added value of a mayor today is about the value of use. The mayor knows their citizens and can unite people around a common cause, which gives meaning to the city. He or she plays a vital role because the real problem facing the smart city of today isn’t technology itself, but the capacity to create uses and services that help to improve the quality of life and meet the needs of citizens. Without this harmonisation, the smart city is meaningless. Its value lies in its uses, in its ability to create social value; it’s not about the technology itself.

What should a mayor do, what approach should they adopt, if they want to build a smart city?

First of all, I think it’s important that a smart city be built over time, over a period longer than the mayor’s term of office. This continuity will strengthen the common cause, the involvement of citizens and partners, and the city’s identity. Why get involved in something that could end after the next election?

Each city also needs to be aware of the uniqueness of the smart city model it’s going to develop. There’s a real danger that cities are sold models, magic formulae for a smart city that, when it comes down to it, is all about appearances. Developing cities have a vast field to explore, offering them incredible opportunities, and they shouldn’t be put off by showcases, preconceived models, or legacies not adapted to their context. Take, for example, the issue of multipolarity. It’s a key driver for emerging megacities with several million inhabitants. And it can even be vital for their sustainability – but once again it’s all a question of context.

Another key element is our ability to evolve our governance models. We need to move away from technical monofunctional verticalisation and think about urban developments in an integrated and global way. We need to know how to open ourselves to private initiatives engaged in the social space, in cities, which are successful economically, but which also forge social links. We need to give space to citizen initiatives while bearing in mind the fact that although the mayor is there to set a vision, to define the development parameters and to oversee the management team, they also need to promote the many different ways in which life is lived in the urban space, in order to shape this open, participation-based, lively and creative approach to the city.  Urban intelligence and new citizen uses, which have grown in number with the advent of social networks and new technologies, have led to the emergence of new initiatives which aim to help change the living environment, here and now, through participatory budgets, and the projects that go with them, in order to transform life in the urban community, for example, or through “crowd sourcing”, that is, the use of collective and civic-minded creativity. This is about the power of the group, channelled into the common good, the public interest.

It’s a prerequisite for its success, its effectiveness and its social acceptability. If we ensure the common good – the urban community – is “invested” by its citizens, and help the citizen identify with their city, then we’ve already made a big step towards creating a smart city. When it clicks with its citizens it’s a game-changer. Medellin is a good example, but there are others.

The key to building this citizen momentum is firstly, in many cities, to return the public space to the citizen to ensure there’s a mix of people, a melting pot effect, in these inhabited living spaces – in other words, spaces that are used by everyone. And to create a sense of ownership, which will foster the idea that all citizens are responsible for this common good. And that’s what will make citizens feel a sense of civic pride in this mix of people.

New technologies can play a key role in developing what I call “hyperproximity”, thereby strengthening the link between citizens and their cities. This hyperproximity is based on the use of new generation social networks, for example, centred on the region, on use, on the identity of the city, and which help strengthen the sense of solidarity in neighbourhoods, while reaching beyond them. The future will be shaped by social networks rooted in the reality of city life, which will bring the citizen and their living space – or rather living spaces – closer together. So what we’ve done here is to summarise the challenges involved in building a smart city: ensuring technology isn’t something that isolates and distances, but rather provides a tool that fosters contact and promotes a greater mix of people and a heightened sense of responsibility for the common good.

The role of the mayor in building a smart city