The air we breathe, is the same for everyone… (Michel Jonasz…) 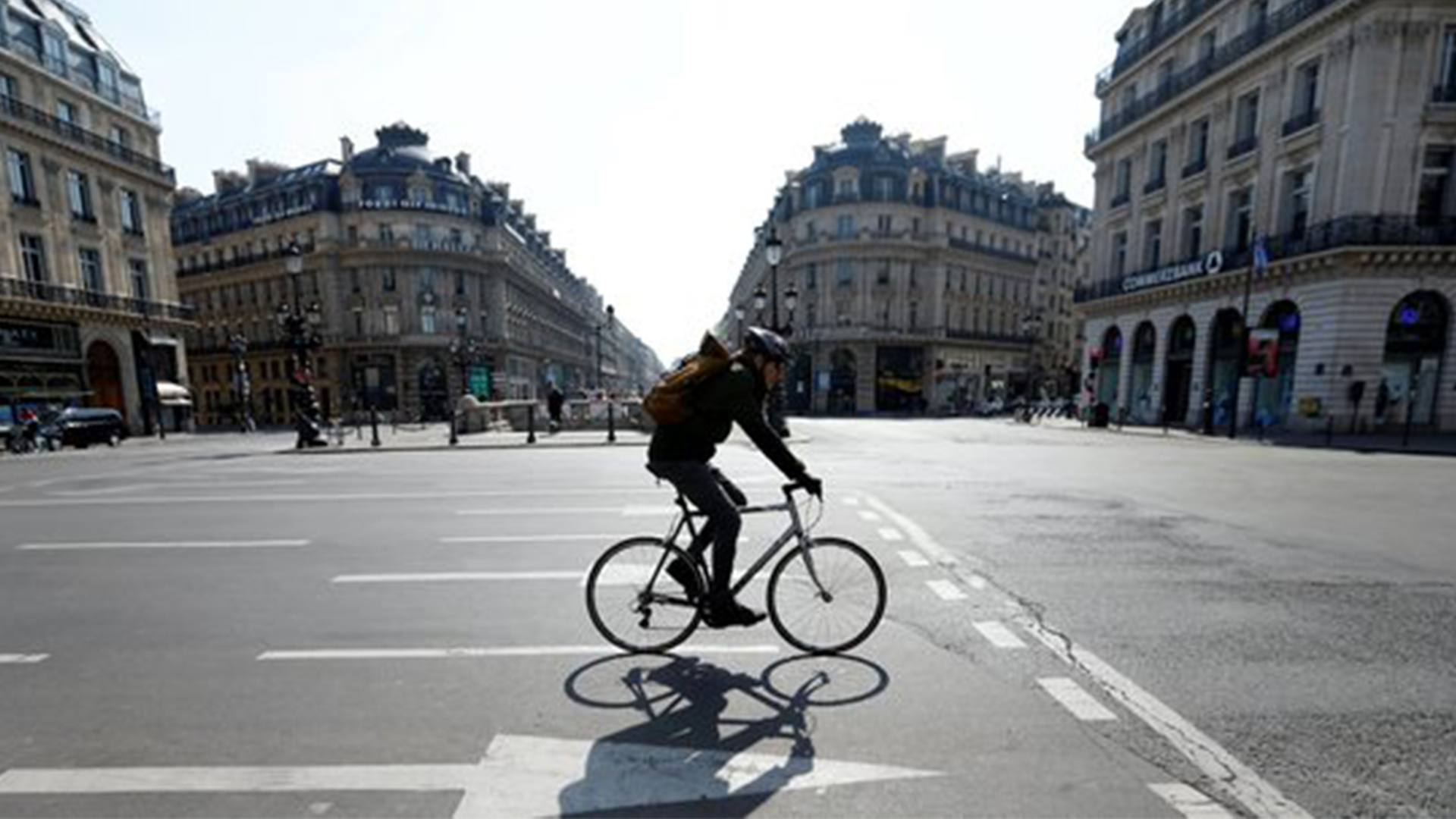 The European Space Agency has published the first maps of satellite data from the Copernicus network, showing dramatic decrease of nitrogen dioxide pollution (NO2) in the great European cities, particularly in Paris, Rome, and Madrid. Airparif has just published an historical record which indicates an improvement of around 30% in the air quality following the fall in road traffic in the Ile-de-France region, with a reduction of more than 60% in nitrogen oxides. Satellite images show fewer cars and therefore this is equivalent to less. However, fine particles from residential heating and agricultural spreading still remain.  If traffic had not been drastically reduced due to containment, we would have experienced the pollution peak which has now become seasonal on Wednesday 18 March

Everywhere in the world we share a common concern— now a priority— urging us to recover the air quality lost due to extensive urban way of life, primarily responsible for its degradation. Paris, Londres, Bruxelles, Madrid, Milan, at the forefront of this fight, have brought European cities together to fight against this disease, which one of the causes of which is the fine particles generated by diesel. The mayors of these capital cities are strongly mobilized on this. We have seen the Mayors of Paris, Brussels  and Madrid expedite an action in the European Court of Justice to win their case. We have also witnessed the “dieselgate” emerge in broad daylight in 2015, confirming scandalous detrimental actions against the health of citizens.

Indeed, the fight against diesel and urban pollution has become one of the main battles of the coming years. Meanwhile, many other cities have joined this irreversible virtuous movement, since air quality has become increasingly important for city dwellers.

In Paris, we have encouraged the deployment of innovative systems for fine monitoring of air quality at breathing height, such as Pollutrack, launched at the COP21 conference, which since then has been tracking fine particles smaller than 2.5 microns.

These famous PM2.5, now recognized by the medical profession as particularly dangerous, have been accounted for in real time for almost three years now, thanks to the 500 electric vehicles brought in by partners who have volunteered to help the City, such as Enedis, VTC Marcel (Renault) and more recently DPD (La Poste group).

This fleet, which is unique in the world, has made it possible to establish the most accurate map of the distribution of fine particle pollution throughout the streets of the French Capital.

This pollution heterogeneity between districts and within districts raises questions. A better understanding of this distribution with the accumulation of tens of millions of data provides the tool that will allow us to focus in priority on, for example, the most exposed schools, childcare facilities, streets and alleys, moving towards a concept of very low emission zones around the most sensitive points, as London, Madrid and Lisbon, as pioneers, have managed to do in an intuitive way.

As pollution episodes involving fine particles are happening with greater frequency, questions have gradually been asked about the possible link with “seasonal flu peaks”. Several times, while investigating on fine air quality, we have acknowledged coincidences, noting  the “seasonal flu peak” often occurred right after a PM2.5 pollution peak.

This period of global Coronavirus explosion generated by the exponential spread of COVID-19 has been the source of scientific work in different cities working on the correlation of these two factors: viruses and fine Particle pollution.

As we know, the coronavirus pandemic started in Wuhan, a city which experienced at the end of 2019 almost two months of an exceptional level of fine PM2.5 particles.

Subsequently, the hot spots that followed this first explosion of the virus were respectively Seoul, also very exposed to fine particles, then Tehran, whose chronic pollution has been a major problem for years, and finally Lombardy, a region situated at the “crossroads” of gaseous emissions of Milan’s diesel engines and ammonia emanating from the many pig farms in the Parma region. The chemical recombination of these different gases gives rise to secondary fine particles through nucleation and then polymerization. Lombardy is one of the most active “PM2.5 Reactors” in Europe, and we know how it started…

Italian research colleagues from the Universities of Bologna, Bari and Milan, together with the Italian Society of Environmental Medicine (SIMIA), published a study on 16 March, stating that “the lightning speed at which the coronavirus epidemic has spread in Italy could be partly explained by pollution”.

This is not the first time this hypothesis has been put forward. Already in 2003, during the SARS crisis, Chinese researchers had also alerted of this possible situation. On the other hand, for the first time, stopping all forms of traffic and a large part of daily activities has made it possible to shed light on agricultural practices, which also generate fine particles. In Lombardy, where the citizens were confined, only industrial activities took place and it was the powerful restart at the end of February of this secondary particle reactor, which is another activity in the Po Plain in Lombardy, one of three European granaries along with the French Beauce and Ukraine, which could thus be monitored very closely. This On the one hand due  to particularly favourable weather conditions a lasting  anticyclone preventing the dispersion of particles, and on the other hand due to spring spreading of ammonium nitrate fertilizer, while, as it happens at spring time,  pig breeding batteries were also running at full speed. All the required conditions were met to generate PM2.5 in quantity, without the slightest dispersive wind.

And unfortunately, due to the continuing industrial, agricultural and domestic heating activities, the researchers saw their hypothesis take shape in reality. While, according to expert forecasts due to containment, the curve of new cases should have continued to follow the same trajectory as China and start a first inflection, this number has risen again, thwarting the most documented forecasts, which did not take into account the pollution parameter.

It is too early to conclude, and a dispersive wind that is now blowing across Europe has fortunately put an end to this PM2.5 episode, which also affected the Île de France region, although with more limited intensity and duration than in Lombardy.

But without a doubt, this is no longer a “black swan”, i.e.  an unpredictable event, but a real lead to be followed and closely monitored: this small virus of 130 nanometres, the equivalent of 0.13 micron, could be using PM2.5 as a ballistic carrier, allowing it to reach the deepest layers of the alveoli in our lungs, where it provokes a devastating inflammatory response, destroying the alveoli.

Air pollution serving as a Trojan Horse for viruses, as Italian researchers  have shown, would then represent a turning point for all cities. From thermal cars to urban incinerators, from oil heating to wooden pallets, everything increasing the risks of weakening our lungs and transport the Coronavirus should give way to strong measures to eliminate this risk.  What is a reality today, even at this stage of the research, is that the Coronavirus crisis is not only a health crisis but a systemic urban multifactorial crisis with environmental and social co-elements that must absolutely be taken into account. Chine searchers have also send an alert about another possible route of transmission of COVID-19, via faeces and urine. This phenomenon was also observed during the SARS crisis in 2003.

Here we are, witnessing the probable convergence of an environmental problem with an absolute health emergency, when our lungs irritated during a PM2.5 peak make us vulnerable to viruses.

From the first publication in the New England Journal of Medicine showing that the coronavirus could “overlap” suspended particles to today, the signal is getting stronger and stronger. There is an urgent need to address this socio-environmental approach in order to move away from a strictly clinical analysis, which can only lead to partial solutions.

In the meantime, “Stay at home” and open your windows regularly, PM2.5 pollution has returned to historically low levels and this is very good news!

Because “the air we breathe, is the same for everyone” sings Michel Jonasz.