To understand what is at stake with the crisis in the Amazon region by Prof. Carlos Moreno / Panthéon Sorbonne University – IAE Paris / Recipient of the 2019 Prospective Medal, the Academy of Architecture, France 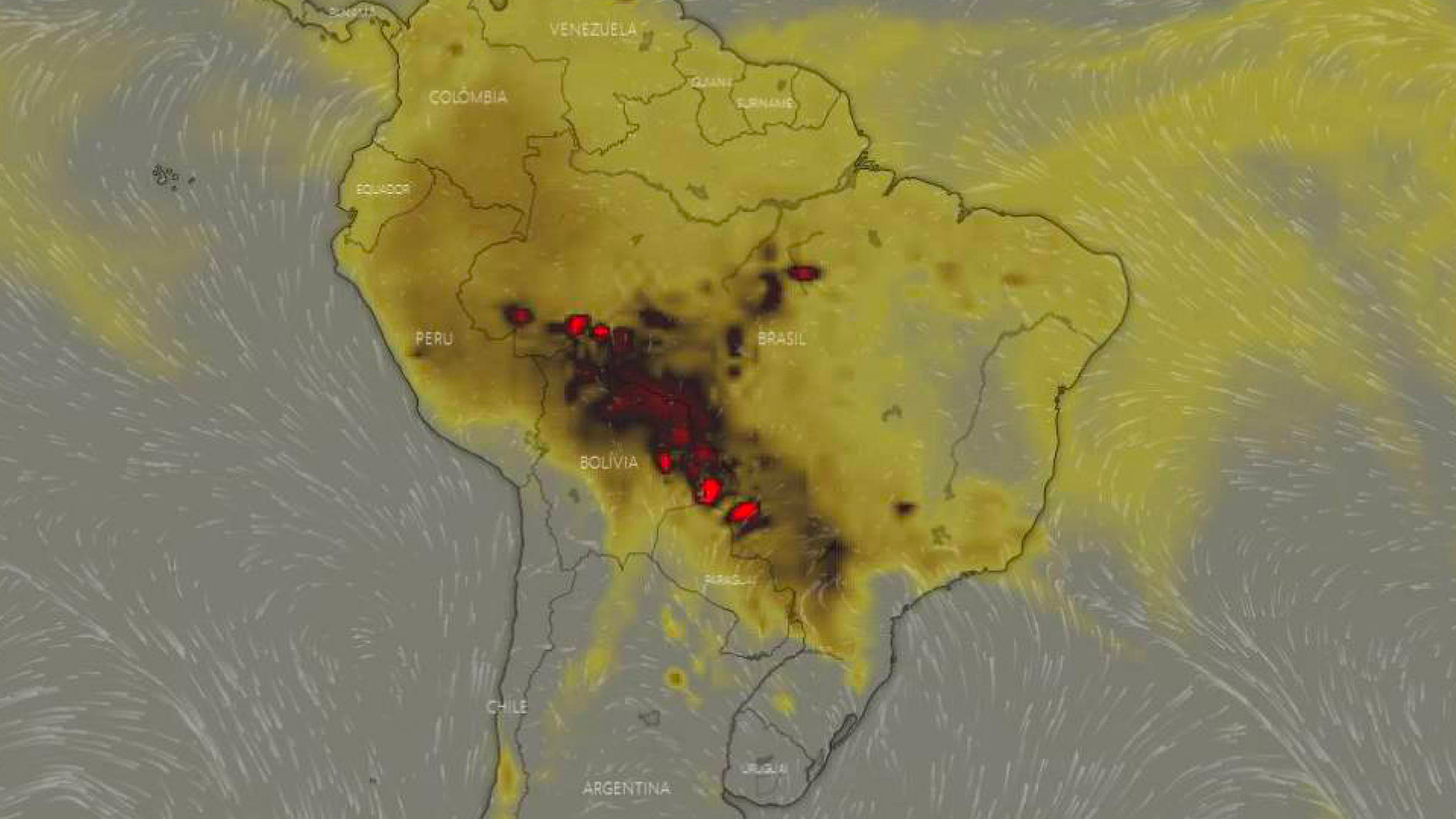 The aim is to contribute to an understanding of the seriousness of the problem and the vital challenge that this ecological disaster poses to humanity as a whole, well beyond any physical border between countries or ideological boundaries between people:

A few data on the fire and its effects

The distance between the Amazon rainforest and Sao Paulo is about 2000 Km. On August 19, the smoke from the fires plunged the city into darkness at 3pm!  It’s as if a fire raging in Athens would suddenly cause Paris and its surroundings to become dark in broad daylight!  As for the smoke alone, it was covering at that time an area equivalent to twice the size of France. Of course, its expansion is continuing, now affecting four countries: Colombia, Ecuador, Peru, and Bolivia, which is also on fire in part of its Amazon region.

Sao Paulo is the most populated world city in South America. With its 20 million inhabitants, it corresponds to a third of France in terms of population, i.e. one Brazilian out of ten leaves there. A large megalopolis. Can we imagine what is happening when the Amazon rainforest is burning and, at 2000 km away, Sao Paulo is plunged in the dark at 3pm? This is called the “viralization” of these dystopic images that began to break through in the media, contributing to the initial awareness of the seriousness of the situation. It was time because for 16 days the Amazon rainforest had been burning within disturbing media and, even more serious, political silence.

Indeed, although the Amazon is the wettest place in the world, it burns much more than during the dry season, which has begun, due to actions of human origin. Between 1st January and 18 August, 71,497 fires broke out in the Amazon region, representing an 82% increase in the number of fires compared to the same period last year.

The anthropogenic nature of the ongoing fires

I invite you to read the interview of a bright Brazilian researcher, Paulo Mountinho, co-founder of the Amazon Environmental Research Institute (IPAM), Distinguished Policy Fellow at The Woods Hole Research Center, USA, who has been working for 20 years in the Amazon region, who explains rather clearly the anthropogenic nature of the Amazon crisis, reflected by forest fires, which in this 2019 season, although there is less drought, are amplified by massive deforestation.
His interview in “El Mostrador, Ciencia – Cultura”  here.

Then it is worth reading through the wealth of work done since 1995 by the Amazon Environmental Research Institute (Pt | En) IPAM. Indeed, the serious deforestation problems in the Amazon did not begin with the coming to power of Jair Bolsonaro. However, he contributed to make them much worse and what is to come is to be feared for all humanity.

Why is Bolsonaro’s politics a serious threat?

The visceral hatred of Indian, black and mixed cultures, which supports Bolsonaro as the expression of white, evangelical, messianic and male power, goes hand in hand with the defence of the interests of intensive agriculture, occupation and theft of land, wild urbanization and all this with the practice of full-scale violence. Let us not forget that deforestation is focused on the cultivation of soy crops and cattle breeding, for the agribusiness and export.

Here is an excerpt from Bolsonaro’s comments about the Indians:
“What a pity that the Brazilian cavalry was not as effective as the Americans. They did exterminate their Indians.” Correio Braziliense, April 12, 1998

“The Indians do not speak our language, they have no money, and they have no culture.  These are indigenous peoples.  How did they manage to obtain 13% of the national territory?” Campo Grande News, 22 April 2015

“This unilateral policy of demarcation of indigenous lands by the executive power will cease to exist. For any reserve that I can reduce, I will do so.  It’s a big battle we’re going to fight against the UN.” Video of Correio do Estado, June 10, 2016

And as there are so many of such comments, the organization “Survival International” has made an icy compilation, classified by themes, citing the source each time.  Once we get to know this, we have a better understanding of the terrible spiral in which we are confronted in the Amazon region.

The underlying problem and the future

The indigenous lands of Brazilian Amazon cover 27% of the forest area and are home to 173 ethnic groups.  They are therefore essential for the preservation of regional and global biodiversity!
Read the report, here, en EN “Indigenous Lands in the Brazilian Amazon: carbon stocks and barriers to deforestation“.

The Amazon area is much larger in size than the EU-27.    A worrying consequence for the global climate of a decrease in forest cover would be the reduction of CO2 storage in soils and vegetation that could release up to 60 GtCO2 into the atmosphere.  To this end, read the scientific article “The Amazon region – a victim of climate change? “

The very rich scientific cooperation with Brazil has a beautiful tool “Confins” a Franco-Brazilian Geography magazine.  In the Issue 37, published end of 2018, I had the opportunity to study a text concerning the impact in the Amazon region of the development of small and medium-sized towns and cities. It describes the worsening of a situation that I had already observed during one of my visits to the area on the Amazonian border between Brazil, Colombia and Peru years earlier.  It concerns the intense interaction between forests and cities, one of the essential aspects to understand the transformations of the Amazon region, the livelihoods of the “ribeirinho” (the one that is urbanizing in the Amazon region) with food supply and changing diets.  The changes have been very rapid, raising important questions about the evolution of socio-environmental relations in new-urban communities.

The introduction of “cash economy” also played a role.  It deeply transforms social relations and has also meant encouraging the introduction of market laws with the rise of industrial agri-food processes concomitant with the search for earnings and profits.  Finally, because “cash economy” also means finding new areas to transform nature into commodities.   These are therefore a set of threats to traditional communities that have emerged and are accelerating throughout the Amazon region with Bolsonaro and his government hostile politics towards them.  Threats to themselves and their physical integrity and socio-territorial status, which is the key to safeguarding the bio-systemic balance, all aggravated by major hydroelectric projects and the expansion of agro-industry!

An instructive work is to compare each of the 3 maps of Large Worksites / Agro-Industry / Deforestation with the 4th map reporting ongoing Fires.  It’s quite enlightening and you can see at a glance that it’s not NGOs or Indian children playing with matches, as we’ve heard!  To further this, reading this text written by Brazilian searchers (en Pt) is edifying.

The impact of smoke

One last point, which will also have its consequences over time: the impact that will have the smoke and its displacement dynamics.  It already affects 4 countries.

The journal Sciences published a scientific study, which is ongoing, on forest fires in Canada and the United States in 2017.  They remained in the stratosphere for 8 months, becoming PiroCumuloNimbus, and are study subject of the most pressing importance.

In Siberia, the other lung on the planet, also sick, the cloud of smoke produced by the ongoing fires is 5 million km2 large, i.e. half the surface area of the EU-27, and has already released 130 MTonnes of CO2.  It has travelled to Alaska and Canada.

Particles of all these smokes remaining in suspension for a long time will have consequences, the first of which researchers have the first leads, particularly on new types of weather phenomena that have been observed.  See here the article published by the US Academy of Sciences, (PNAS).

These problems are quite representative of the issues of complexity, through the total interdependence of phenomena, systems and lifestyles.

Let us recall the sublime words of our great universal master and thinker Edgar Morin, who in his magnificent text “Terre-Patrie” in 1993 told us:

“Here we are, tiny and human, on the tiny film surrounding the tiny planet lost in the huge universe.  This planet is at the same time a teeming world, ours. At a time when scattered societies on the globe have become interdependent, awareness of the community of earthly destiny must be raised.  We are in solidarity with each other in and around this planet.  It is our Homeland Land.”

In “Éloge de la Métamorphose” in 2010, Edgar Morin challenges us again: “What is probable is disintegration.  What is improbable but possible is metamorphosis.  To avoid the disintegration of the Earth system, we urgently need to change our ways of thinking and living.”

There you go, ten years later we are just in the middle of it!

So here we are, tackling the fundamental problems: radically changing our way of life, our consumption, our production, our way of looking at others; and praying to succeed will simply not be good enough!  This highlights the relevance of the global struggle for the “common goods”. Yes, a total and global initiative is essential to save this worldwide collective feature, the Amazon and beyond this “common good” characteristic which is essential to the ecological balance of global biodiversity.

This is an international emergency.  As attacks against the earth’s defenders are increasing all over the world, it is becoming essential to take action to protect them.  This is still chilling information from the UN dealing with the environment, and according to the study from  Globalwitness, half of the murders of environmental activists in 2018 took place in Latin America, first in Brazil and then in Colombia.

Let us not forget that a world-famous figure such as Francia Marquez, Goldman Prize winner and Nobel Prize winner for Ecology, was recently the victim of a brutal attack in Colombia.  She was rewarded in 2018 for her commitment against the illegal mining industry, another terrible cause of land stripping, pollution and river drying up.

The United Nations has just set up a mechanism, precisely to help protect them from the indiscriminate violence that is being perpetrated against them.   I invite you to read the dreadful report, “Defenders of the Earth“, which details all this deadly violence against environmental activists perpetrated around the world.

We must understand that in the face of this long list of deaths, simply to defend the balance of the planet and the right to live with dignity and in harmony with nature, indeed, the international community must exert pressure to protect lives and beyond to take concrete measures to prevent another piece of this global domino of eco-systems from being seriously damaged.