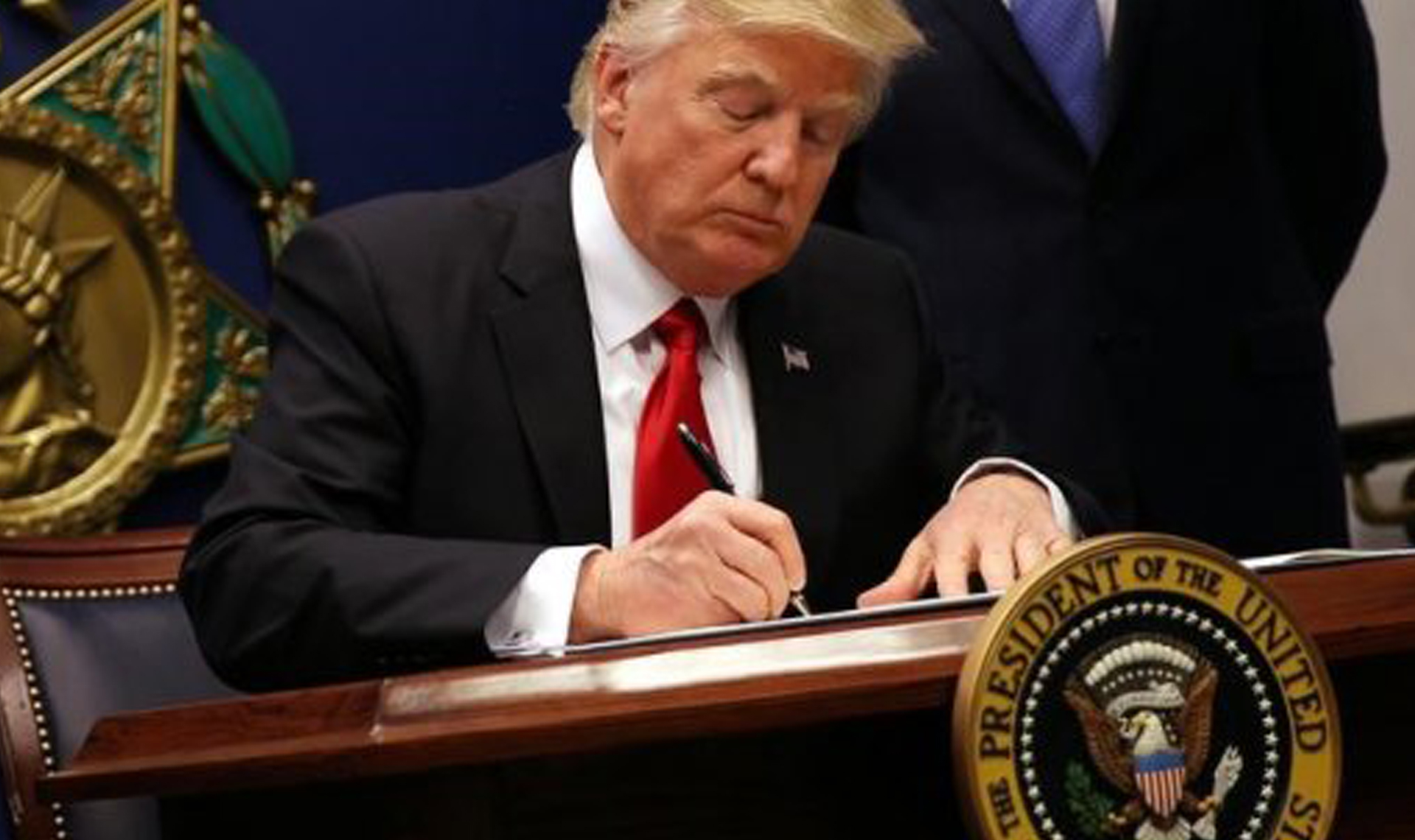 The famous sentence of the writer and Italian thinker Antonio Gramsci spans time and rightly forces itself on our attention: “the crisis appears when the old world is dying away, and the new world struggles to come forth, and in this twilight now is the time of monsters“. He also said, at the same time, – the 30s have experienced the earliest signs of fascism being rolled out (…), [1] I am a pessimist of the intellect but an optimist of the will“. Within one month, with the deep upheavals present in all our minds ,the year 2017 provides a condensed overview of this vision.[2]

The first decisions taken by President Donald Trump, whether they are the appointments within his team, the renunciation of the action plan on the climate change or the relaunching of the fossil fuels, not only affect profoundly the USA but impact de facto, the whole world. A global event took place on Saturday, January 24th with the promulgation of “Protecting the nation From Foreign Terrorist Entry Into the United States” which forbids the entry in the United States of the foreign nationals, including the binational of 7 countries for a duration of 90 days, suspends the arrival of the refugees for 120 days (and indefinitely for the Syrians), cancels the data protection of the foreigners, the Privacy Act, and spreads all the measures also to the holders of the “Green Card”, which nevertheless authorizes them to live and work in the USA. In all the airports of the world in a few hours, emergency situations took place concerning the boarding or rather the passengers disembarking aiming the USA. Against these actions, a powerful citizen mobilization  rose up in the USA, along with a legal fight, which at the moment was proved right with a federal judge blocking some of these measures.

In a few minutes, for the first time in the American history, symbolic creative technological companies creating economic wealth and new value models in the XXIst century, expressed themselves publicly, namely their CEOS, not only to condemn this decision but also to fight it concretely. The CEOs of Facebook, Google, Soft, Apple Microphone, Netflix, Tesla, Amazon, AirBnB, Twitter, among others, drummed up support, including by participating for some, in the spontaneous demonstrations in airports, or in city centers. They also explained the disastrous consequences of this decision on their companies, but also for the economic activity inside the USA and on the international scale. It’s probably the first time that the famous conference “Game Developers Conference” (GDC) which took place at the same moment in San Francisco called to join demonstrations in the airports.

President Obama had already established a policy aimed at  restricting the visas formalities for the USA, towards the citizens of these 7 countries, -in particular after the terrorist attacks in France and within the framework of the rightful fight against the Islamic obscurantism-, but the radical, brutal and totally blind treatment of this decision is justified by Donald Trump from a tripartite point of view: the migratory question, the refugees and the fight against discriminatory terrorism.

On behalf of “Make America Great Again”, we are in reality facing of the implementation of one of these monsters of the crisis considered by Gramsci.

In fact, beyond the shock that it means, this crisis highlights the profound global upheavals concerning our ways of life, of consumption, of production, of access to the science, to the culture, to the knowledge, to the social relationships, in a world in transition under the ubiquity of two major drivers of change: urbanization and technology.

Indeed, 120 years after the 2 nd industrial revolution, 100 years after the Bolshevik revolution, 75 after the rise of fascism, 50 after the cold war, 30 after the collapse of the Berlin Wall, it is a double revolution  which took place these last 25 years. That of the populating of the global population in cities, at the same time as the convergence of the digital technology , of the bio and materials revolutiontakes place , with profound transformations in our lives. New players have stepped in. Only the understanding of the power of this double revolution will allow to pave the way to anticipate the upheavals which are going to increase in the coming years.

It is not a revolution for the control of the means of production that is at stake, but  the transformation of the meaning of work and of its social and relational expressions, in a world which has become ,in a few years, urban, metropolitan, soon hyper metropolitan and  ubiquitous, and all at once. It is the ecological revolution, not as an idealistic representation of nature, but as a transformation of the relations of man with these 4 elements which are part of his everyday life,  water, fire,energy, earth and air; with the urban space and its land-use planning and development. It is at the heart of our future as city-dwellers, of our health, even of our survival, when the 2 % of the global surface that are cities and metropolises in the world, will welcome at the term of 2050, 70 % of a world population with 9 billion inhabitants.

But it also brings about the revolution of new urban social relationships, in particular the rights of women. The urban life intervenes as a powerful catalyst of the liberating energy of women. In a few decades, the urban massification also allowed women to have new channels of expression, of socialization, to express themselves and to lead the fights for their rights, to abortion, against male chauvinism, for equality, and for the recognition of their work. In a few decades, the urban woman moved forward on fights against hundred-year(sometimes more)-old oppressions. The Women’s March with the Pussy Hat Projectwhichmobilized massively in the whole world the day following Trump’s nomination,is ,in that respect, an example.

And more globally it is to do with the social rights of otherness, of the life in the city, to love the one we have chosen openly, as we want, to build one’s family environment as we think best, to procreate or not to procreate, or to adopt, breaking the model of a stereotyped family based on patterns of other times, of old fashioned social hierarchies shattered by the strength of an urban culture which opens to new forms of expression and social relationships.

It is also the opening to the world, from which the cultural mix is not that virtual. The cities which have become multicultural, cosmopolitan, although exercising  a proper urban identity, are also shaped by this diversity and welcome many forms of expression stemming from this mixture. What was formerly the foreigner, the immigrant, is becoming an urban citizen, who has taken roots in a territory which he/she likes, without giving up his origins, and brings his/her contribution to the value creation. The social networks, the immediacy of the internet, allow him/her to live his/her culture of origin without compromising his/her urban socialization, which extends over several generations, mobile themselves.

The decisions taken by Trump are to be read in the light of this crisis in the way of Gramsci: a world which does not want to die and struggles in this twilight, banning, forbidding, and willing to take up with former business and social models, with property, with production, with consumption, which are irremediably obsolete. Yes, it is a real shock, that is ready to ripple outward and will continue to do so, under multiple forms. Yes, its strength lies in its ability to persuade that older times were better and that they will be back. In its ability to treat poverty, the poverty and the outcasts, those who suffer in these violent crises, as many instruments of a populist but also elitist power, which won’t be relevant to their lives tomorrow, nor as it was yesterday.

But the mask cannot be worn for a long time because this urban, metropolitan world, is drumming up support and fosters not only resistance, but above all change. Trump and all his followers are then going to look away from the central question: this shock of a life and society plan, and so doing, single out, but also imagine, make out, stigmatize enemies, distant or close, former or new, to justify the indefensible with measures as extremist as ineffective, as those which have been taken. More than ever, the strengths of progress, gathered in urban areas,  are the mainspring of this birth of a new world. The battle will be long, rough and hard, but isn’t it a matter of being able to bring to the foreground another world ?

In 1917, the Bolshevik revolution took place with these days which shook the world under the slogan “proletarians of the world, unite. 100 years later,  another world is moving off and  calls forthe urban people of the world to unite to shape their own destiny : that of the human, friendly and expanding metropolises conveying otherness … Indeed, urban people of the world,  do unite, let us unite, so as to build cities for life, and cities for all! It is at the heart of our fight.