Invited to Bordeaux to introduce the launch of the Mobility Charter for the Bordeaux Metropolis, Professor Carlos Moreno shared his vision of intelligent mobility in our global cities here in the 21st century.

On 1 January, 2015, 11 French cities, including Lille, Nantes, Renne, Rouen and Strasbourg, were granted the status of métropole or metropolis. This was also the case for Bordeaux which changed from an “Urban Community” to a “Metropolis” and to mark the occasion wished to adopt a Mobility Charter that would apply across its entire metropolitan area. Invited to introduce the launch day of this Charter, which was also attended by former French Prime Minister Alain Juppé, I presented a keynote speech that set out my vision of the major challenges for intelligent mobility in the 21st century, a century characterised by the “global cities”, as coined by Saskia Sassen, which I wanted to present to you here today.

Cities are above all else – and this is a point of view that I am constantly defending on the international stage – places for living, sharing, hybridisation and social mixing. As we know, one key phenomenon of the 21st century is the explosion of urbanisation. This change of scale brings into sharper focus socio-territorial vulnerabilities in the urban environment which are themselves growing in scale. Vulnerability now spans every dimension of the city: social, economic, geographic, architectural and so forth. This trend compels us to think about the way in which urban intelligence must now measure up to this change of scale to provide these new metropolises with a strong socio-territorial identity, a greater quality of life accompanied by new services and amenities, and a satisfactory level of acceptability among citizens. 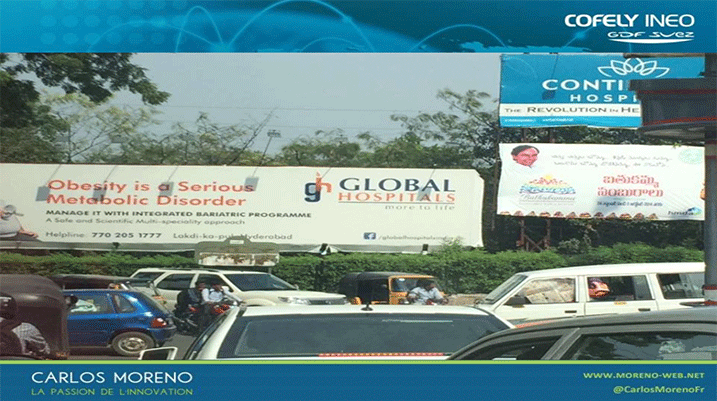 In this context, mobility stands as one of the essential lines of approach to explore in view of building tomorrow’s metropolises since it represents one of the major challenges of urban life. Mobility cannot be aproached from the perspective of sectoral solutions that are strictly geographic, regional or technological. On the contrary, the phenomenon must be considered as a means to spearhead the construction of any metropolitan urban project. Planning the future of the metropolis is an urban project that requires medium-term vision and encompasses the social, civic, economic and cultural life of its residents. However, mobility is the key to giving concrete form to finding a continuum in the change of scale imposed by the metropolis. It allows a global approach to envisioning the urban space since the objective is to irrigate vast regions of varying levels of density.

In an ever-changing world that is becoming increasingly urbanised, where just under 10% of the world population lives in 35 megalopolises, the socio-territorial dimension intersects other important challenges, such as climate change, the draining of natural resources and pollution on the one hand, and resilience, territorial security and the continuity of critical services in the event of disaster on the other hand. It is vital these issues be taken into consideration to formulate viable systemic solutions, in terms of mobility, for our cities. 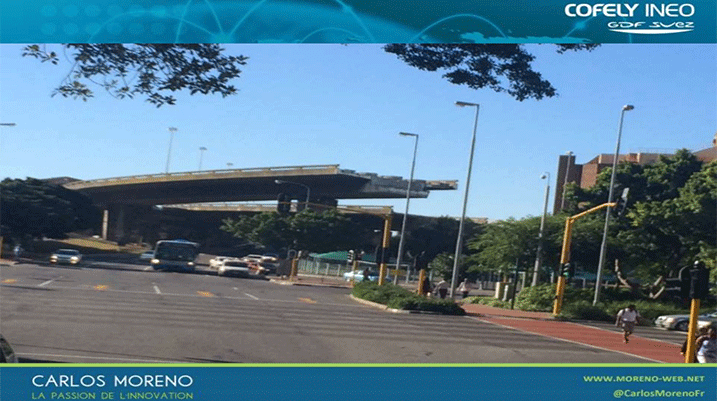 Let’s look at a few examples of socio-territorial vulnerability at the international level. Hyderabad, in India, is the sixth most populous urban agglomeration and recently hosted the Metropolis World Congress. Today it holds the ambition to compete with Bangalore on the world stage to become India’s next technology start-up capital. As it pursues the path to metropolisation, however, it faces a number of problems, notably as regards mobility. For instance, the city’s first Metro Rail line is only just nearing completion. I have an interesting comparison to make here between Rio de Janeiro and Shanghai. In 1993, Rio had two metro lines; in 2013 it stll had only two, one of these had simply been extended. In 1993, Shanghai did not have any metro system to talk of. By 2013, it had built a dense network of many lines sprawling out across the city, a brilliant example of an urban project shoring up a city’s development.

Another noteworthy example is in the city of Cape Town in South Africa where an extensive highway project was abruptly stopped some twenty years ago because it did not have the backing of a bona fide urban project. It left behind absurd remnants of infrastructure on the urban landscape – like this cut-off bridge suspended in the air that is now used as a location for films of all genres. 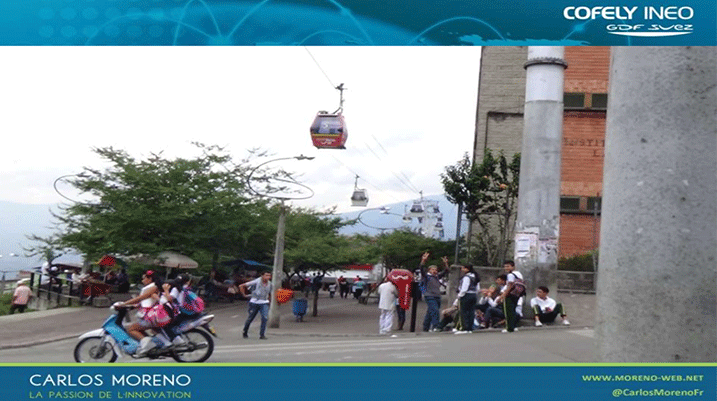 We can also look to cities in Southeast Asia whose streets have been invaded with mopeds and scooters. In Hanoi, for example, the excessive massification of two-wheelers as a mode of transport has adulterated its public spaces, in particular the pavements that are, as is traditional in these countries, places of life and interaction between residents. It has become impossible to eat there or sit down for a chat despite these being practices deeply embedded in the country’s culture.

There are, however, examples of successful urban projects. Medellin, in Colombia, transformed its Metrocable – the type of cable car system generally associated with ski resorts – into much more than a simple mode of transport. It became an effective tool encouraging social inclusion by breaking down barriers between different neighbourhoods. Each Metrocable station was also designed to be a space for life, cultutal integration and artistic expression in view of constructing a more harmonious and more equitable society. 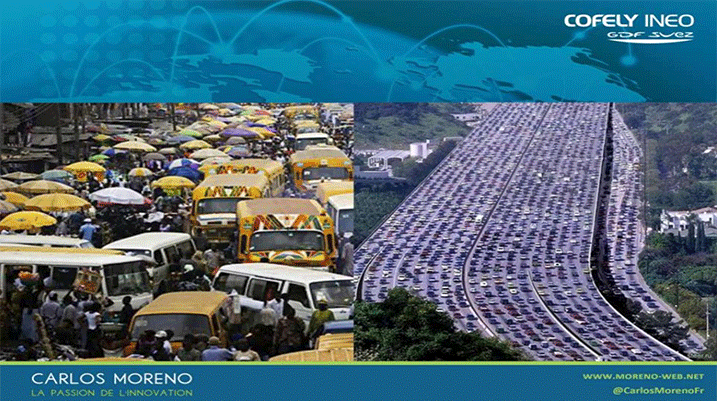 To finish I would like to point out that the environmental component of our cities in the 21st century compels us to take a systemic approach when looking at the different components that make up the urban space. A city, owing to its transport and buildings, is a major contributor to current global CO2 emissions. This is a further reason why it is crucial to take a systemic approach to mobility within the framework of an overarching and coherent urban project. This is the direction taken by the French metropolises with the Climate-Air and Energy-Territories programmes that I encourage them to adhere to and strengthen.

Socio-territorial vulnerability is expressed, it seems to me, in the social mixing we have the power to generate in our public spaces – and mobility has become a strong expression of this vulnerability that now exists at a structural level. Let me give you an example: in Greater Paris, the attack on a driver on an RER A express train can cause the entire transport network to come to a grinding halt, paralysing the city. A fact that can be applied to numerous cities in France and worldwide. To absorb this type of vulnerability, we need to revise our urban development model in terms of social inclusion. In the Estonian capital of Tallin, making public transport free has positively affected all the city’s residents. 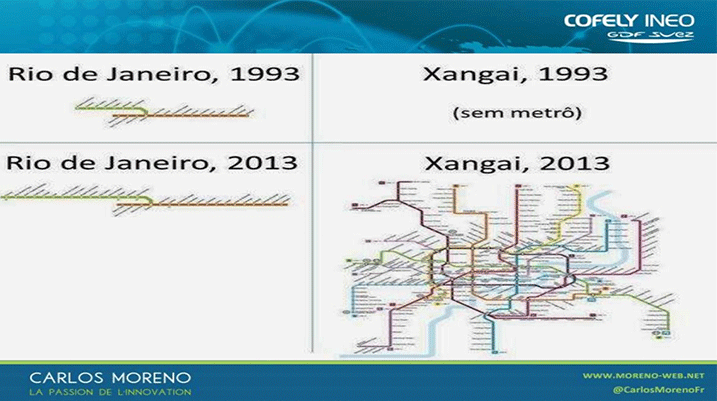 Nontheless it is clear that in the 21st century ubiquity has revolutionised our lives and our transport systems thanks to technology, the massification of communicating objects and the Internet of Things. It also engenders new uses that open the way to innovative socio-economic development models. Technological advances open new opportunities for urban mobility. But more than connected cars, real-time information systems et cetera, what we are seeing emerge and what I find most interesting are new economic models (the sharing, collaborative or multitude economy) that are ultimately a source of dialogue and social relations because they create other modes of consumption.

At this start of the 21st century, we are seeing new paradigms, sources of ground-breaking change, emerge. Urban intelligence endows us with the resources to rebuild social relations, to live and work in alternative ways by devising new urban infrastructures. This is the chance to reconsider the relationship between ourselves and the city centre by moving to polycentric cities, more diversified cities, where socio-cultural aspirations are more tightly meshed. This turn of the century is perhaps also the moment, for us, to think about demobility, which could help us envisage other modes of living that integrate local needs. At a time when technology promises us hyper speed and hyper fluidity, it is in the hyper local – a concept I hold dear – that we will perhaps find the means to restore balance in our urban lives.